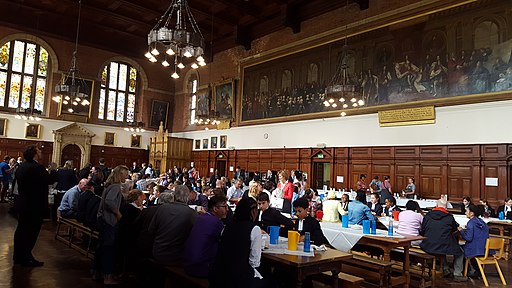 Christ’s Hospital school, Sussex, which has been admitting mainly pupils from less privileged backgrounds since 1552
There has been much debate following the Labour conference’s motion to “abolish private schools”.

When explaining the rules of cricket to the average American, one sees their eyes glazing over even before one reaches mention of “deep square leg”.

It’s the same when you try to explain to them that, in the UK, public schools are private schools. You may reach the point when you feel further explanation is pointless. Why not, instead, try explaining to them that Scotch whisky has no “e”, but Irish whiskey does. It may be easier.

There. I’ve said it.

There are two key points to remember in this discussion:

1. Eton is atypical of public schools generally. For every Eton there are hundreds of less rarefied public schools. I went to a school on the fringes of Exmoor which, in the 70s, was fairly down-to-earth. There were no straw boaters.

2. Public schools widen access to their facilities by providing school fee assistance through scholarships and bursaries to pupils whose parents cannot afford the fees (this is means-tested). A third of all pupils at public schools (Independent Schools Council) are on reduced fees and 6,000 pay no fees at all. At Christ’s Hospital in Sussex most of the pupils are on greatly reduced fees or pay nothing at all. Their admission requirements are quite high, academically, though.

I was fortunate to attend public school and I did so only because I managed to win the top scholarship for the school that year. As a result, my parents did not have to pay any tuition fees for me throughout my school career. Otherwise, they would not have been able to afford to send me to the school.

Nowadays I contribute each month to a bursary to send a pupil from a less well-off family to attend my old school. It’s this side of things which gives many independent schools their charitable status. This seems to be strange to some people, but try setting up a charity with the Charity Commission and you’ll find out how stringent their standards are.

In an ideal world I would not want public schools to exist. Indeed, I generally don’t like them. We sent our child to a local state school and I was delighted by the normal social circle which this gave our child. I spent decades recovering from the social isolation at my school and, particularly, from the lack of girls (since corrected).

But I would not ban public schools. It seems to me that, in a liberal society, if people want to spend their money on sending their children to public schools, then let them do it.

In my town, with a good of choice concerning state schools that are arguably just as good, if not better, than many public schools, it would seem unusual to pay money to send a child to a public school, though I can understand why this might happen in the case of particular children who have special needs or are highly gifted.

I also feel that there is, as ever, need for reform and I would start with increasing the requirement of public schools to give reduced fees and fee waivers to those from less privileged backgrounds by tightening the rules for charitable status recognition.

The Labour motion does not abolish public schools per se. They actually decided to remove their charitable status and “redistribut(e) their endowments, investments and properties to the state sector.” That last clause strikes horror in me. They actually want to seize properties from their owners and transfer the ownership to the state?

Someone at conference asked me what the difference between Labour and the Liberal Democrats is, philosophically. Well if there is anything that makes me feel a Liberal and feel horrified by the Labour party, it is that clause: “redistribute their endowments, investments and properties to the state sector”. It’s nothing less than theft.