Embed from Getty Images
In the photo above, Nick Clegg leaves Number Ten Downing Street this morning for an audience with the Queen upon the dissolution of Parliament.

We’ve had many debates on this website about the record of the Lib Dems in government. Nick Clegg has received shedloads of stinging criticism. END_OF_DOCUMENT_TOKEN_TO_BE_REPLACED

On Channel 4 On Demand, I watched Coalition earlier today.

I was not impressed by the first few minutes covering the election campaign. However, once the election polls closed, the drama changed gear and was superb from that minute onwards.

The acting was first-rate. Mark Gatiss as Peter Mandelson was priceless. Donald Sumpter was utterly brilliant as Paddy. Chris Larkin was great as Danny Alexander. OK, the latter two didn’t look like Danny/Paddy but they “got” them. Acting is not impersonation. Acting involves getting into a character, and I think Sumpter and the rest of the cast did that.

There were a few hilarious episodes that had me laughing out loud.

And the climax was very gripping.

This piece is a major contributor to helping us to understand the events of May 2010. 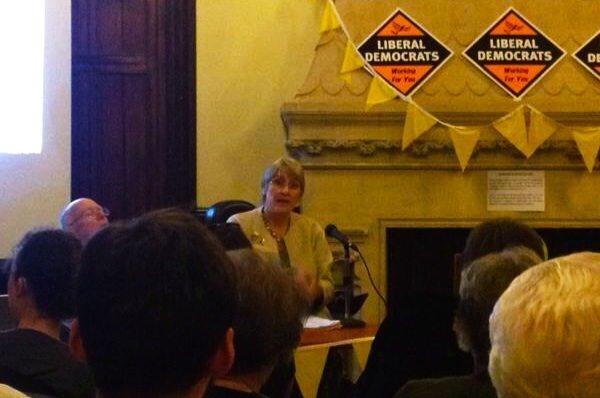 It was very exciting to be at last night’s West Berkshire Lib Dems campaign launch at Newbury Town Hall. We were very privileged to have Liberal Democrat Party President Sal Brinton present. She gave a very inspiring speech (photo above). I was also very inspired to hear Judith Bunting give a rousing address.

The Guardian have a very useful web page called Election 2015: The Guardian poll projection. On it, each day, they update their state-of-the-parties graph with the latest polling data, which then flows into an infographic showing the parliamentary arithmetic and possible government options after May 7th. END_OF_DOCUMENT_TOKEN_TO_BE_REPLACED

I am reproducing in full the summary text of the BBC report on the Clarkson incident, below.

I am just utterly breathless that anyone can think the BBC did anything except the completely unavoidable. They took the only action they could take in the circumstances.

Guido Fawkes is saying “lentils all round” and that the BBC have finally found an “excuse” to get rid of Clarkson.

…and then followed it up with: “when I was a kid two blokes would have taken it outside and brushed it off.”

She has no clue, has she? This is a work situation. Since when are fracas between bosses and staff solved by going outside to fight? (It is superfluous to point out that Clarkson is six foot five, but I feel I ought to).

I see Sky have categorically said they will not hire Clarkson. “Experts” are saying ITV will improve their brand by hiring him.

That is highly debatable.

On 9 March 2015, Jeremy Clarkson reported to BBC management that he had been involved in a physical and verbal incident with Oisin Tymon, the producer of Top Gear, at the Simonstone Hall hotel, North Yorkshire, while working on location. The incident had occurred on 4 March 2015 and Jeremy Clarkson was suspended on 10 March, pending investigation.

I was asked to undertake an investigation to establish the facts of what occurred. In conducting my investigation, in line with the BBC’s usual practice, I interviewed a number of witnesses and others connected with the incident. Accounts were agreed, based on my interviews, with each participant.

Specific facts I have found as part of my investigation are as follows:
Earlier on 4 March, studio recording of Top Gear had taken place in Surrey and the presenters had travelled that same evening to the location shoot in North Yorkshire.

The incident occurred on a patio area of the Simonstone Hall hotel, where Oisin Tymon was working on location for Top Gear.
The physical attack lasted around 30 seconds and was halted by the intervention of a witness.
It is the case that Oisin Tymon offered no retaliation.
The verbal abuse was directed at Oisin Tymon on more than one occasion – both during the attack and subsequently inside the hotel – and contained the strongest expletives and threats to sack him. The abuse was at such volume as to be heard in the dining room, and the shouting was audible in a hotel bedroom.
Derogatory and abusive language, relating to Oisin Tymon and other members of the Top Gear team, continued to be used by Jeremy Clarkson inside the hotel, in the presence of others, for a sustained period of time.
It is clear that Oisin Tymon was shocked and distressed by the incident, and believed that he had lost his job.
Following the attack, I understand that Oisin Tymon drove to a nearby A&E department for examination.
Over the subsequent days, Jeremy Clarkson made a number of attempts to apologise to Oisin Tymon by way of text, email and in person.
And it is the case that Jeremy Clarkson reported the incident to BBC management.

It was not disputed by Jeremy Clarkson or any witness that Oisin Tymon was the victim of an unprovoked physical and verbal attack. It is also clear to me that Oisin Tymon is an important creative member of the Top Gear team who is well-valued and respected. He has suffered significant personal distress as a result of this incident, through no fault of his own.

Visiting Falmouth last weekend, I became aware of something extraordinary, the news of which I had missed earlier. END_OF_DOCUMENT_TOKEN_TO_BE_REPLACED

Health warning: I’ve been reading the Mail Online about this. It appears that there have been more journalists roaming the North Yorkshire moors in the last few days than at any time since the invention of the printing press.

Do you know how much a helicopter costs for three hours? It’s a lot of money. All paid for by the license payers, I suspect.

And was the chef at the hotel not entirely justified in going home when the “guests” were an alleged two hours late for their meal? (The general manager later rolled up his sleeves and cooked the broadcaster a steak, which makes the whole fracas a bit of an alleged farce).

And was the alleged alternative of bar snacks, including hot soup, not entirely reasonable?

The alternative, that is, to a £21.95 sirloin steak which the broadcaster allegedly wanted, complete with fondant potatoes, fried wild mushrooms, grilled cherry tomatoes and pink peppercorn sauce.

Has the said broadcaster not allegedly lost the plot if he is allegedly spending three hours in the pub, allegedly delaying a helicopter and, allegedly, dinner, and then allegedly throwing his toys out of the pram, including an alleged scuffle which he allegedly caused?

I was very struck by an article by Ian Morris, who worked on the Top Gear team for many years:

And that leads me to an odd conclusion. Namely, that perhaps those involved – like Clarkson – are bored. The show has run for longer than anyone, including them, expected. Bored people can, sometimes, look for ways to put an end to things, and if Jeremy wants to go and work for Sky making a different show, then belligerently arguing with the BBC and his producers is one way to get out. It’s also important to note that all three presenters were weeks off signing new contracts that would lock them into the show for three more years.

I would perhaps add the word “subconsciously” in there somewhere. I don’t think JC deliberately entered into a fracas. But perhaps something in the back of his head was at work. Do people who really want to keep a job allegedly keep helicopters waiting for three hours while they are allegedly in the pub and then allegedly have a “dust up” with a staff member?

And on that bombshell….