And many congratulations to Caron on entering the highly exclusive “Three posts in the Golden Dozen in one week” club!

It’s easy to take simple things in life for granted. Like food and warmth. Sleep is something you don’t realise is so precious until you can’t sleep – night after night. In late 2000 I couldn’t sleep for many nights and it really was sheer torture. I never take sleep for granted nowadays.

After this evening, I’ll never take for granted an ability which I am fortunate to have in spades. …The ability to speak fluently.

“The Kings Speech” is an awesomely powerful film. My parents and grandparents have spoken highly of King George VI. It wasn’t until saw this film that I fully appreciated why that was. It certainly demonstrated how precious is the power of speech. …And one could say about George VI – “Cometh the hour, cometh the man”.

The film is as good as people have said. I was sobbing uncontrollably at the end. And I am a Republican. 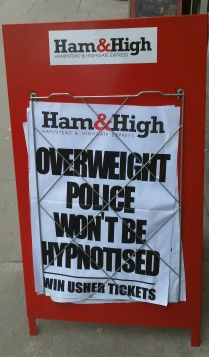 It seems that, as a fleeting visitor, I was missing a bit of a back story. If I had seen the original story, which was presumably: “Overweight police will be hypnotised” it might have made a bit more sense.

After coming home, I found the explanatory original story in the Evening Standard here.

Well, it seems it might be an 11 Downing Street rat, but, whatever, the rat-catcher arrived this week to do his dirty.

If there’s one person about whom I could easily be provoked to make a Tweet which could get me charged by the Crown Prosecution Service, it is Katie Hopkins.

Putting my venom aside, I would simply pick her up on one comment on Question Time last night. She said, in terms, that we should get rid of “Choop”.

She meant “TUPE” which I have always heard referred to as “toopee”. But pronunciation aside, TUPE is or are the Transfer of Undertakings (Protection of Employment) regulations. It/They mean/s, broadly, that if an activity or business is moved from one owner to another, the empolyees in that business have their terms and conditions protected and their employment continued.

Admittedly, TUPE provides many lawyers with a sumptuous living. For every lawyer you can find who says “this isn’t covered by TUPE”, you’ll find another who says the opposite.

That, effectively, is what doing away with TUPE would do.

It would be a highly retrograde and pernicious step for employees’ rights in this country.

Putting aside all the other stuff Katie Hopkins said on Question Time last night, if we just concentrate on that one suggestion, it is clear that it is the product of a deeply unattractive and reactionary strand of thinking.

Trust me, it took me over an hour and a lot of cutting and pasting to find out.

This is humour, I should emphasise, from “Harry and Paul”. (Hurrah for them.) But after events this week, it’s a bit near the knuckle or bang on the button, whichever way you want to look at it.