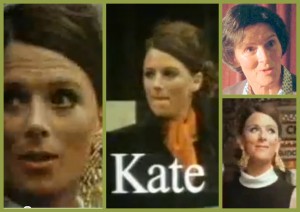 We’re avid fans of the BBC series “New Tricks”. Such a wonderful series. Such lovely luvvie darlings playing the roles!

This week I idly let slip to the missus the blithe suggestion that I thought that the actress that plays the “New Tricks” character Brian Lane’s long suffering wife, Esther, was once a very glamorous young actress in the BBC’s highly popular sixties series “Take Three Girls”.

Of course, that set me off on an “Am I right or am I wrong?” research googling exercise. I was right. Susan Jameson plays Esther Lane in “New Tricks” and was “Kate” in “Take Three Girls” in 1969.

“Take Three Girls” was a hugely popular series which also starred Liza Goddard. It followed the fortunes of three young girls who came to London with mixed results.

I ought to add that Susan Jameson, in real life, is married to James Bolam, who also stars in “New Tricks”.

Another notable feature of “Take three girls” was the beautiful theme song by Pentangle. It was entitled “Light Flight”.

Here below is the opening of “Take Three girls”. “New Tricks” can be seen on BBC iPlayer here.

Some politicians are difficult to impersonate (apparently) because they are so bland and normal looking.

So, at the opposite extreme, Ed Miliband must surely be manna from heaven for the impressionist.

The voice! Nasal and sinussy. That funny splutter on certain syllables.

-All delivered as if he is half-asleep.

..And all that soap opera with his brother to tap into.

I would have thought Alistair McGowan is in pole position to deliver the best impersonation of Brother Ed. He has a similar shaped head to E.Miliband.

I should imagine there’s a lot of “Brother Ed” voice rehearsal going on as we speak.

I am get a little tired of the lady on Radio Four who keeps on saying that Ed Miliband only won the Labour leadership by a hair’s breadth.

He actually got 28,299 more votes than his brother. Is that normally described as a “hair’s breadth”?

It’s only a “hair’s breadth” if you go along with Labour’s complex electoral college system which gives MPs the same power as 762 trade union members.

I think we have moved to a position in this country where we accept that MPs should not elect their party leader and that there should a “one person one vote” election for party leaders. Labour have a very distorted system. It can be “one person fifteen votes”.

But we need to be clear here.

You can argue about whether the trade union membership should be allowed to vote. And you could say that the trade unions have too much influence on the Labour party.

But we should remember that the days of the union “block vote”, where one union grandee held up a card at conference to indicate how the votes of thousands of members would go in the election of a leader, are over.

OK, some of these votes were duplicates – for example a Labour member who is also a member of Unite could vote twice. (But then, that rule applies to supporters of all the candidates in equal measure.)

But even then, there is no denying that Ed Miliband, in a sort of complex, foggy and rather unsatisfactory way, has been elected by real people. Real Union members in real jobs paying £11 plus a month to be members of their union (as well as Labour party members). Real people with metaphoric or actual dirt under their fingernails.

Under the current Labour constitution, those real people deserve to be heard and I am sick to death of poncey, patronizing media people going on about a hairbreadth’s result and Ed Miliband not having the support of MPs.

He has been elected fair and square by a very clear margin and David Miliband should go round with a big “L” for “Loser” on his forehead just to make the situation clear.

The US TV show ‘Saturday Night Live’ has repeatedly featured “Sarah Palin” in its skits. Now they have pounced on one of Palin’s Tea Party protégés, Christine O’Donnell, the Republican Senatorial candidate for Delaware.

Ms O’Donnell has the baggage of a vast archive of strange outbursts on comedian Bill Maher’s “Politically Incorrect” TV programme. Bill Maher is releasing choice cuts from his library on a gradual drip-feed basis.

The Portsmouth News carries some more comments concerning the reports of a police “investigation” into alleged/reported allegations concerning Mike Hancock MP. I am somewhat astounded that the police have not actually contacted Mike Hancock concerning this matter, according to his spokesman. You would have thought that, with the papers bandying about words such as “police investigation” and “sex”, the police would have at least contacted the MP. The absence of such contact leads one to suspect (dare I say it) that the press reporting is completely exaggerated:

A spokesman for Mr Hancock later released a statement saying: ‘The Sunday Times story is exaggerated and taken completely out of context.

‘Mike Hancock denies any allegations of any inappropriate behaviour and in no circumstances did any take place.

‘All Mike Hancock did was offer help and support to this woman.

‘Mike Hancock has not been contacted by Hampshire Police or been informed of any formal allegations or investigation.

‘He will of course co-operate with the police if they ever contact him.’

From a pub in deepest West Berkshire. The ball is dangling on a string and spins round when……..you get the picture.

I’ve been going through Labour’s detailed voting numbers from their leadership election.

It is absolutely correct to say that it were the Brothers in the Unions wot won it for Brother Ed. Just look at the summary:

A stonking win by Ed in the Union vote cancelled out modest leads for David amongst Labour MPs/MEPs and members. (And, by the way, it’s been calculated that about 7 more MPs voting for David would have won it for him).

The election was a mammoth exercise in waste paper creation. I hope they’ll be recycling the unused ballot papers somehow. 2,747,030 ballot papers were distributed to affiliate members. Only 247,339 or 14.6% came back. And 14.6% of those were spoilt!

Ed Miliband was a whacking 12 points ahead of David Miliband in the first preference affiliate voting:  35.4% to 23.5%.

That margin is easily accounted for by the margin with which Ed won the first preference votes of just two unions – Unite the Union and GMB – compared to David:

Indeed, the Unite margin accounts for 87% of Ed’s margin over his brother on first preferences.

When you look at the fourth round of voting, when the other candidates were eliminated, the margin on all preferences voting by affiliates for Ed over David was 39,139.  That margin was virtually all accounted for by the first preferences of members of just four unions:

So I think we can say relatively categorically that it was Unite the Union wot won it for Brother Ed.

From the Press Association:

A senior Liberal Democrat MP is being investigated by police following allegations he tried to seduce a vulnerable female constituent, it has been disclosed.

Mike Hancock, MP for Portsmouth South, was reportedly approached by the 36-year-old single mother with problems about noisy neighbours and inadequacies in her healthcare.

Over a number of months, the married politician took the woman to dinner, bought her gifts, including perfume, clothes and a teddy bear, and sent her intimate text messages, the Sunday Times said.

In a number of letters Mr Hancock wrote on behalf of his constituent, her mental health problems were freely acknowledged, the newspaper added.

Detectives were said to be alerted by the unnamed woman’s family support worker. Mr Hancock was unavailable for immediate comment.

He told the newspaper that “under no circumstances” had any sexual activity taken place between them but he had taken her out to dinner and bought her gifts “to cheer her up”.

“It would be a very sad day indeed where MPs cannot act in a holistic and friendly way that helps their constituents,” he added.

A Hampshire Police spokeswoman confirmed an investigation had been launched by officers after they received a complaint.

She said: “Information regarding the welfare of a female from the Portsmouth area was passed to us by a third party on August 5 this year. No offences were disclosed at the time but the information remained on file. On Friday, September 24 we received contact from a female in relation to the matter and inquiries are now in hand.”

A Lib Dem spokesman said: “The police are investigating. It’s a private matter. The party is unable to comment.”